I’m still thinking about the events one hundred years ago in 1919: the March 1 movement for independence and its aftermath. I am lucky to live close to many places of historical interest, like Seodaemun prison and Severance hospital, which are full of history right on my doorstep.


Soedaemun prison was built in 1908 as Gyeongseong prison (which was the Japanese name for Seoul). It was built by colonial Japanese authorities for the purpose of controlling the local population. Originally designed to hold 500 people, in the years following the peaceful uprising, the numbers swelled to nearly five times that number, with prisoners housed in overcrowded conditions.

Among those who were imprisoned at that time, one was school-girl Yu Gwan-sun (16), who died in September 1920 from the torture inflicted on her. According to police records discovered in 2011, of the 45000 who were arrested by Japanese authorities in relation to the protests, 7500 died from maltreatment. 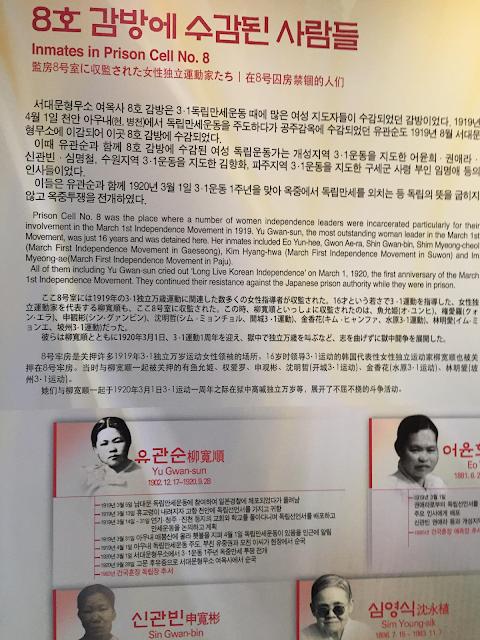 One of predecessors, Dr. Frank Schofield of Severance hospital, was an eyewitness to the events. He went around Seoul with his camera, making a record of the demonstrations to send overseas. As a doctor at Severance, he also ended up treating many of the casualties. Apparently he was also able to get access to Seodaemun prison at one point by showing the business card of the chief of police to the guards. This allowed him to go in and see the conditions in the prison firsthand.


Here are a few photos that appeared in a Red Cross pamphlet published in 1920 (probably taken by Schofield).


One of my sharpest realizations was how easily the prison was put to re-use after Korea was liberated in 1945. It was given a new name (Seoul prison) and then put into use by the new regime for exactly the same purpose as the old: as a mechanism for controlling the local population. It served this purpose until the end of military rule in 1987.


This is a reminder that the situation of Korea today is directly connected with what took place in Korea a hundred years ago. One cannot understand the one without understanding the other.